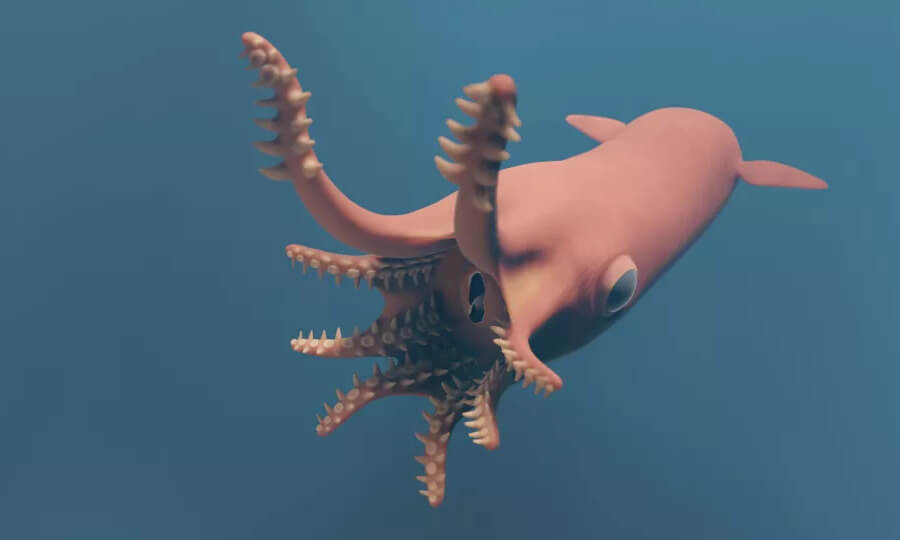 There were squid-like creatures in the Jurassic Period that used supersuckers to snatch prey out of the water column and lock it in place with a watertight seal.

A Jurassic vampire squid-like creature used Supersuckers to snatch prey out of the water column and lock it with a watertight seal, 3D imaging of several fossils reveals. The cephalopod likely hunted in the open ocean and had rows of muscular suckers that it used to capture prey.

"For the first time, we can show that there was a combination of anatomical characters in V. rhodanica not seen today," first author Alison Rowe, a doctoral student at the Palaeontology Research Center in Paris (CR2P), a lab backed by Sorbonne University, the French National Centre for Scientific Research and the National Museum of Natural History in Paris, told Live Science in an email.

The three fossils featured in the study were originally excavated from La Voulte-sur-Rhône Lagerstätte, an exceptional fossil site located in the Ardèche region of southeastern France. The site is about 164 million years old, which dates to the middle of the Jurassic period (201.3 million to 145.5 million years ago). It contains a trove of different fossilized marine organisms.

In particular, the X-ray analyses allowed the team to reconstruct the cephalopods' suckers in high resolution, such that they could "virtually dissect" the suckers on-screen, Whalen noted. These suckers are similar in shape to those of vampire squid, although they differ in that they're larger, more numerous, and spaced closer together. V. rhodanica also carries a slightly different configuration of suckers and cirri on two of its arms, which measure slightly longer than its other six arms.

"It seems reasonable to me to say that this animal was predatory," Whalen said. This sets the Jurassic cephalopod apart from vampire squid since modern animals don't hunt and instead feed on tiny organisms and bits of organic material that drift down to the deep sea from shallower ocean layers.

Vampire squid uses long, sticky structures called filaments to pluck their food from the water column, but the authors didn't find evidence of these filaments in V. rhodanica. It may be that the Jurassic animals truly lacked these structures, or it could be that they're just missing from the specimens examined, Whalen said. A true lack of filaments could hint that V. rhodanica is more closely related to modern octopuses than to vampire squids since octopuses also lack filaments. Still, for now, this is an open question, he said.