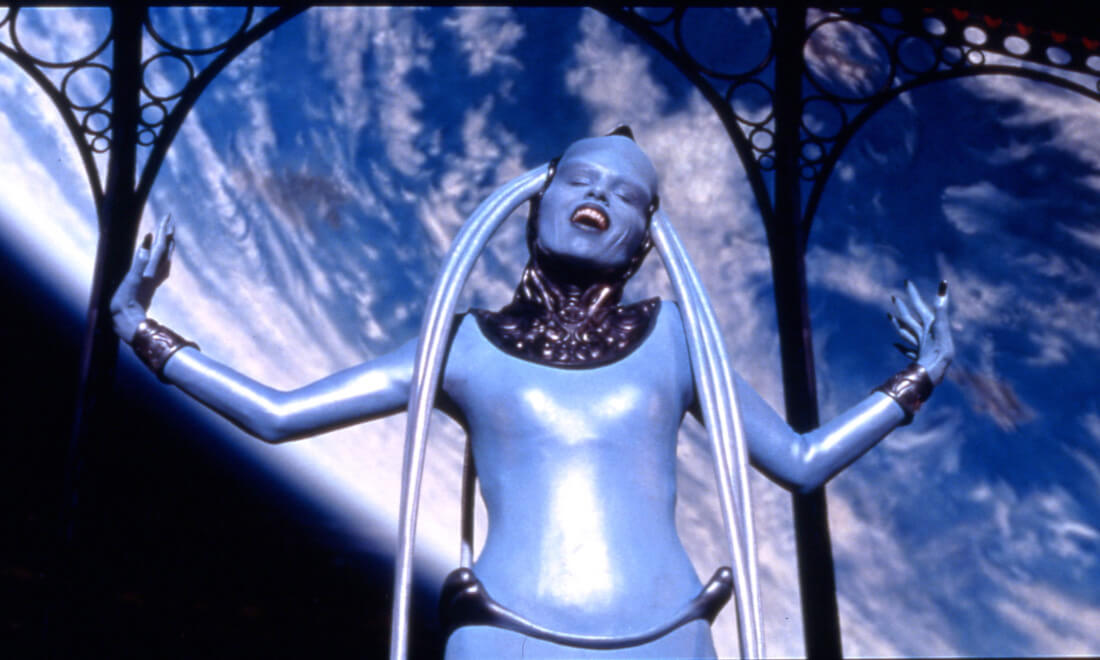 In the operatic song of The Fifth Element, composer Eric Serra wrote un-singable things so she’d sound like an alien. But Inva Muls sang 85% of what thought was impossible, the rest being assembled in the studio.

Eric Serra tells us about the notorious diva scene in The Fifth Element, played by his girlfriend at the time Maïwenn and of which he composed the music, translated by Antonin Pruvot.

In that scene, Maïwenn plays the diva, but the voice is not hers. It is the one of a true opera singer, the Albanian Inva Mula. When the scene is shot she is a young talented soprano, yet her agent was Maria Callas‘ one too, showing if need to be, that she was already a promising artist. Today she is in the world’s top ten sopranos. For the scene to work, we needed her to sound like an alien. Therefore we had to create notes that no human could sing. So I purposely wrote un-singable things, some too low, some too high, sentences that were too fast. I would then arrange it with the sampler.

I had never worked with an opera singer before. I didn’t quite realize the technical ability they had. I thought that only 60% of the song was actually possible to sing. In the studio before even taking her coat off, she started humming from the music sheet. I was astonished, the beauty of her tone of voice and the perfection of her singing gave me shivers down my spine. Yet she was only humming. I couldn’t believe it. We sat down and she started to sing. I was overwhelmed. She sang 85% of what I thought was technically impossible. I then sampled and edited her voice a bit. It might seem obvious nowadays but at the time many wondered how I did it.

When I explained to them what I was going to do they didn’t quite understand. But they decided to trust me. When the time of the validation came I was impressed. I was facing Maria Callas and the Austrian conductor Herbert von Karajan’s agent and a magnificent opera singer. Very high-ranked people in a musical environment that I knew little about but for which I had nothing but admiration. Editing it, I felt like a child fooling around with something sacred! I sat them in front of my console. I was terrified. After their first hearing both turned back and asked: “Can we hear it again?” After the second time they turned back again and they were amazed. She said:” How did you do it?!” She didn’t understand how I could make sounds that were impossible to sing. They were like kids.