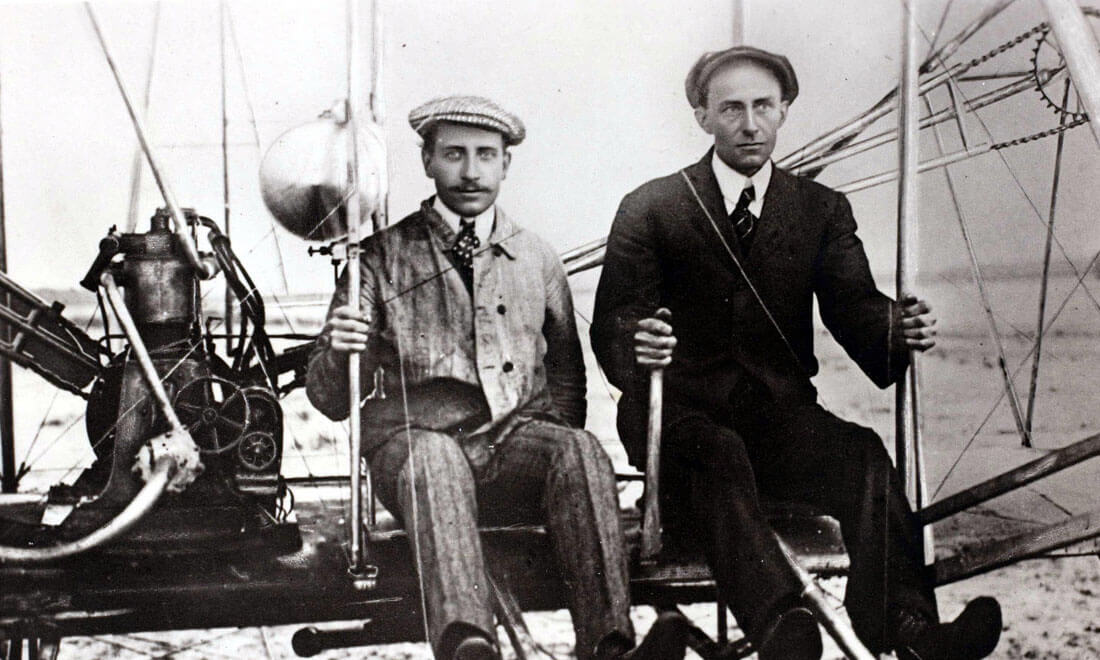 The Wright Brothers only flew together on the same flight one time to avoid the chance of a double tragedy and to ensure one brother would remain to continue their flight experiments.

The Wright brothers, Orville Wright and Wilbur Wright were American aviation pioneers generally credited with inventing, building, and flying the world's the first successful motor-operated airplane. They made the first controlled, sustained flight of a powered, heavier-than-air aircraft with the Wright Flyer on December 17, 1903, 4 mi (6 km) south of Kitty Hawk, North Carolina, at what is now known as Kill Devil Hills. The brothers were also the first to invent aircraft controls that made the fixed-wing powered flight possible.

In 1904–1905, the Wright brothers developed their flying machine to make longer-running and more aerodynamic flights with the Wright Flyer II, followed by the first truly practical fixed-wing aircraft, the Wright Flyer III. The brothers' breakthrough was creating a three-axis control system, which enabled the pilot to steer the aircraft effectively and maintain its equilibrium. This method remains standard on fixed-wing aircraft of all kinds. From the beginning of their aeronautical work, Wilbur and Orville focused on developing a reliable method of pilot control as the key to solving "the flying problem." This approach differed significantly from other experimenters of the time who put more emphasis on developing powerful engines. Using a small home-built wind tunnel, the Wrights also collected more accurate data than any before, enabling them to design more efficient wings and propellers. Their first U.S. patent did not claim the invention of the flying machine but rather a system of aerodynamic control that manipulated the flying machine's surfaces.

The brothers gained the mechanical skills essential to their success by working for years in their Dayton, Ohio-based shop with printing presses, bicycles, motors, and other machinery. Their work with bicycles, in particular, influenced their belief that an unstable vehicle such as a flying machine could be controlled and balanced with practice. This was a trend, as many other aviation pioneers were also dedicated cyclists and involved in the bicycle business in various ways. From 1900 until their first powered flights in late 1903, the brothers conducted extensive glider tests that developed their pilot's skills. Their shop employee Charles Taylor became an important part of the team, building their first airplane engine in close collaboration with the brothers.

The Wright brothers' status as inventors of the airplane has been subject to counter-claims by various parties. Much controversy persists over the many competing claims of early aviators. Edward Roach, the historian for the Dayton Aviation Heritage National Historical Park, argues that they were excellent self-taught engineers who could run a small company, but they did not have the business skills or temperament to dominate the growing aviation industry.

On May 25, 1910, Orville piloted two unique flights back at Huffman Prairie. First, he took off on a six-minute flight with Wilbur as his passenger, the only time the Wright brothers ever flew together. They received permission from their father to make the flight. They had always promised Milton they would never fly together to avoid the chance of a double tragedy and to ensure one brother would remain to continue their experiments. Next, Orville took his 82-year-old father on a nearly 7-minute flight, the only powered aerial excursion of Milton Wright's life. The aircraft rose to about 350 feet (107 m) while the elderly Wright called to his son, "Higher, Orville, higher!".