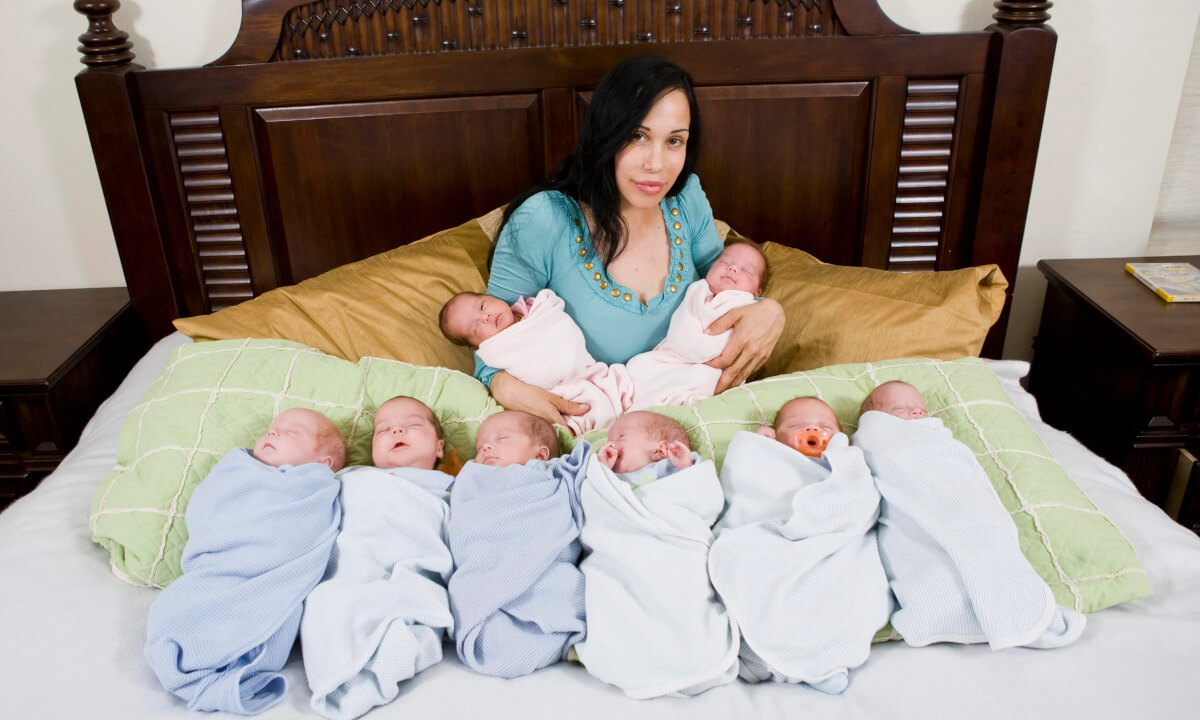 Natalie Suleman, a single mom, was implanted with 12 embryos and gave birth to 8 babies (octuplets). They are currently the longest surviving octuplets ever.

Natalie Denise Suleman, known as Octomom in the media, is an American media personality who came to international attention when she gave birth to octuplets in January 2009. One week after their birth, they surpassed the previous worldwide survival rate for a complete set of octuplets set by the Chukwu octuplets in 1998. The circumstances of their high order multiple births led to controversy in the field of assisted reproductive technology, as well as an investigation by the Medical Board of California of the fertility specialist involved.

Suleman conceived the octuplets and her six older children via in vitro fertilization (IVF). Although she initially denied ever having used public assistance, she confirmed in April 2012 on NBC's Today show that she was on public assistance.

In 2009, Suleman stated that she had six embryos left over from her previous IVF treatments. She explained that she requested all of the remaining embryos be transferred into her uterus at one time. A woman her age would normally have a maximum of three embryos transferred. Suleman states that part of her reasoning for attempting the sixth pregnancy was so that the frozen embryos would not be destroyed. Fresh cycles were always done, despite there being available frozen embryos stored with Dr. Kamrava. In June 2011, during a California Medical Board investigation, it was found that Kamrava had transferred twelve embryos, which the board found to be an "extreme" departure from the standard of care. After reviewing Suleman's case and three other cases, the Medical Board of California voted to revoke Kamrava's medical license, effective July 1, 2011.

News of the octuplets caused an international media sensation. Public response was largely negative, including death threats. There has been much public discussion about Suleman's decision to have the octuplets, including a minor protest outside the Suleman home. Many expressed concern that Suleman's decision for more children would burden taxpayers via public support. Suleman claimed to be able to independently support her children, saying she was planning to return to school to complete a master's degree in counseling. Still, records showed that Suleman was unemployed after receiving disability between 2002 and 2008 as payment for a back injury suffered during a riot in September 1999.

In March 2009, Suleman bought a new house in La Habra. Many stories questioned that the octuplets would be released from the hospital, while Suleman expressed concern about losing custody of them. In the early morning hours of April 1, the day she would bring home the seventh octuplet, vandals threw a baby seat through the back window of her Toyota minivan. As of April 14, 2009, all of the children were home with their mother and grandmother. The octuplets celebrated their first birthday on January 26, 2010. Suleman told People magazine, "I don't get much sleep, but I'm used to that. Once one of the kids gets up, they all get up. Some nights I don't sleep or for as little as half an hour. On the good nights, I may get up to two full hours. The longest I've gone without sleeping is 72 hours. It's hard, but I'm continuing to move forward with my life and trying to be the best mother I can be."