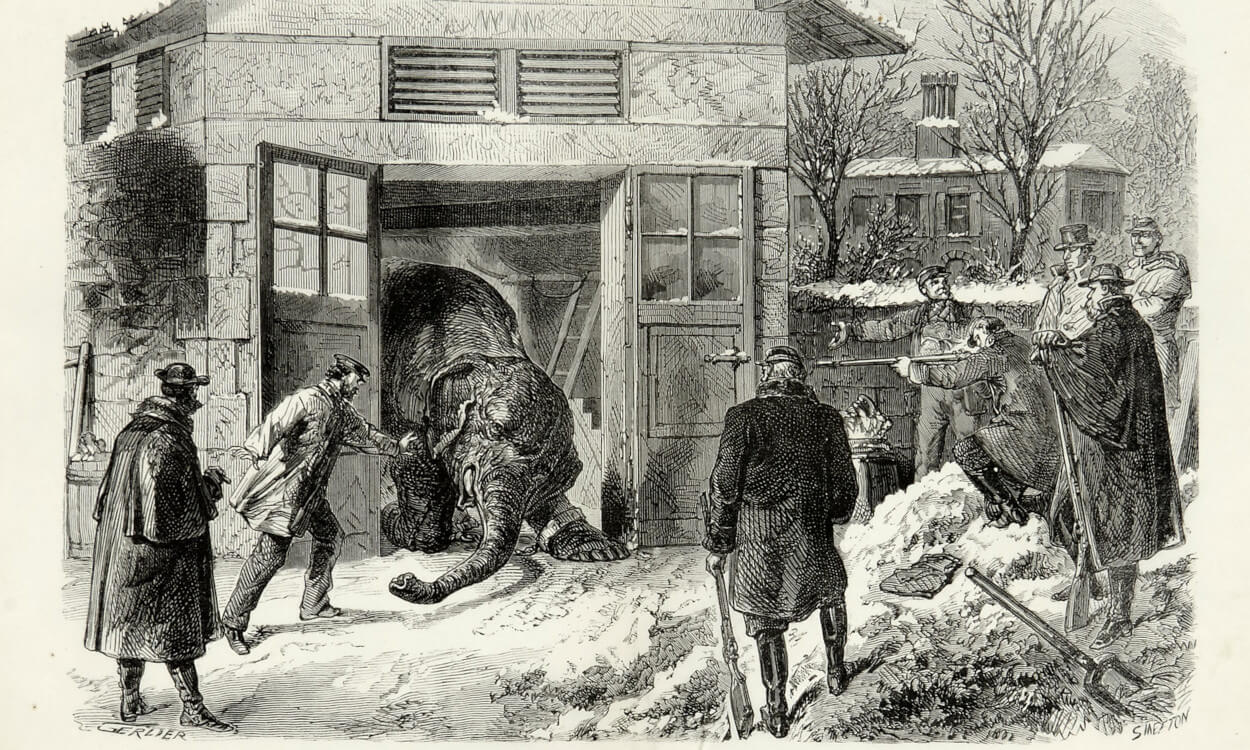 The Zoo for Food

During a siege between France and Prussia in 1870, trapped Parisians dined on rats, cats, and even elephants. In these desperate times, the zoo became a source of food.

The Zoo for Food

For four months, from September 19, 1870, to January 28, 1871, the Prussian Army laid siege to the city of Paris as part of the Franco-Prussian War. Before having all supply lines cut off, the French Ministry of Agriculture furiously worked to gather as much food and fuel as possible. In the beginning, "livestock blanket the Bois de Boulogne park on the edge of Paris."

Insufficient, within less than a month, the Parisians began butchering the horses, with the meat used as you would expect and even the blood collected "to make puddings." Approximately 65,000 horses were killed and eaten by the end of the siege.

Within another month, by November 12, 1870, butchered dogs and cats began to appear for sale at the market alongside trays full of dead rats and pigeons. The former pets sold for between 20 and 40 cents per pound, while a nice, fat rat could go for 50.

As Christmas approached, most of Paris' restaurants and cafés were forced to close, although a few of its top eateries continued serving, albeit with a markedly different menu. And as traditional meats were becoming increasingly scarce, the formerly impossible became the actual – when M. Deboos of the Boucherie Anglaise (English Butcher) purchased a pair of zoo elephants, named Castor and Pollux, for 27,000 francs.

The enormous animals were killed with explosive, steel-tipped bullets fired at close range, chopped up, and sold, with the trunks being the most desirable and selling for 40-45 francs per pound, and other parts between 10 and 14.

The elephants weren't the only zoo animals featured on these menus, as the Voison also served kangaroo and antelope, while Peter's also served peacock. In addition, their chef's transformed rats, mules, donkeys, dogs, and cats into roasts, chops, cutlets, and ragouts.

In any event, the siege was ended by a 23-night bombardment campaign in January, in which the Prussians lobbed 12,000 shells into the city, killing and wounding around 400 people. The Franco-Prussian War officially ended with the Treaty of Frankfurt on May 10, 1871.