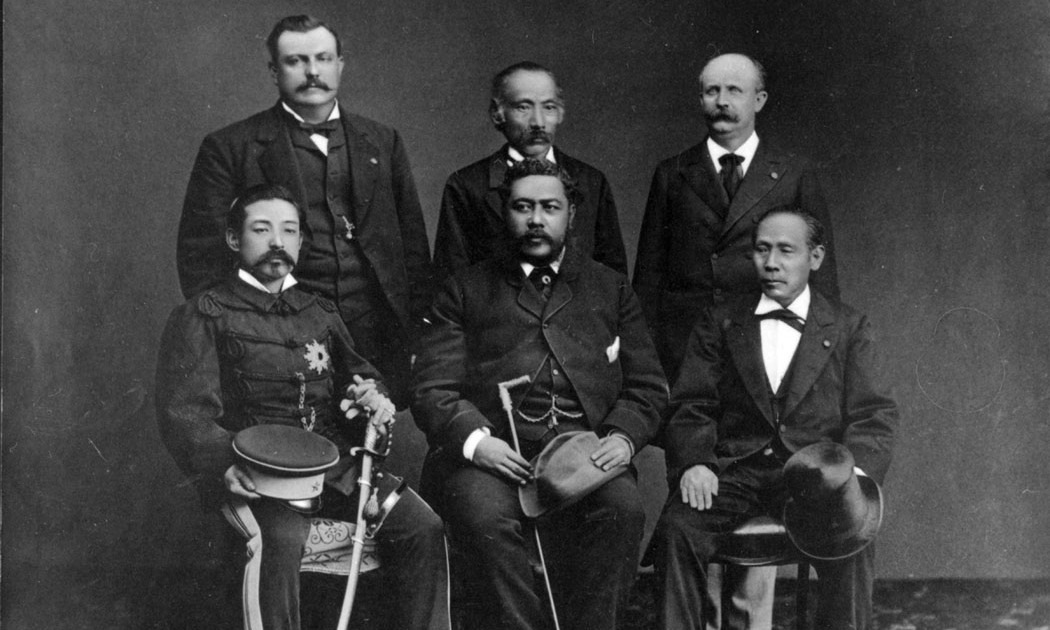 To save the Hawaiian culture and people from disappearing, Kalakaua, the last king of the Hawaiian kingdom, went on a world tour in 1881. He became the first reigning monarch to circumnavigate the globe.

The 1881 world tour of King Kalakaua of the Hawaiian Kingdom was his attempt to save the Hawaiian culture and population from extinction by importing a labor force from Asia-Pacific nations. His efforts brought the small island nation to the attention of world leaders but sparked rumors that the kingdom was for sale. Critics in Hawaii believed the labor negotiations were just an excuse to see the world. The 281-day trip gave Kalakaua the distinction of being the first monarch to circumnavigate the globe; his 1874 travels had made him the first reigning monarch to visit America and the first honoree of a state dinner at the White House.

Kalakaua met with heads of state in Asia, the Mideast, and Europe to encourage an influx of sugar plantation labor in family groups and unmarried women as potential brides for Hawaii's existing contract laborers. While in Asia, he tried to forestall American ambitions by offering a plan to Emperor Meiji for putting Hawaii under the protection of the Empire of Japan with an arranged marriage between his niece Kaiulani and a Japanese prince. On his visit to Portugal, he negotiated a treaty of friendship and commerce with Hawaii to provide a legal framework for the emigration of Portuguese laborers to Hawaii. The King had an audience in Rome with Pope Leo XIII and met with many of the crowned heads of Europe. Britain's Queen Victoria and the splendor of her royal life impressed him more than any other monarchy; having significantly been affected by the ornate trappings of European sovereigns, he would soon have Hawaii's monarchy mirror that grandeur.

The King traveled with no security guards; only a small group of personal friends made the journey. Except for land transportation in cities and two loaned ships in China and the U.S., his modes of transportation were seldom reserved exclusively for him. He shared regularly scheduled steamships and rail transport with fare-paying passengers. On the Red Sea, he played cards and danced with other passengers. Like other tourists, he visited the white elephants of Siam, the Giza pyramid complex in Egypt, tourist sites in India, and museums in Europe. Along the way, he exceeded his original budget, shopping regardless, and sent letters back home.

President James A. Garfield died four days before they arrived back in the United States. Kalakaua paid a courtesy call to newly inaugurated President Chester A. Arthur at the White House in Washington, D.C. There were no public or private appearances for the King in New York, only a day at Coney Island. Before leaving the eastern U.S., the King met with Thomas Edison to see a demonstration of electric lights and visited Virginia's, Fort Monroe. He toured Hampton Normal and Agricultural School and shopped for horses in Kentucky. The royal party boarded a train to California, where they were house guests of Claus Spreckels at his estate in Aptos (near Santa Cruz), and spent a few days seeing the sights before sailing back to Hawaii. Kalakaua was successfully jumped-starting new immigration, the first transplants arriving in Hawaii less than a year later. In the years that followed, he began emulating the lifestyles of European royalty with expensive furnishings in Iolani Palace, a public coronation for himself, and a two-week public celebration of his birthday.