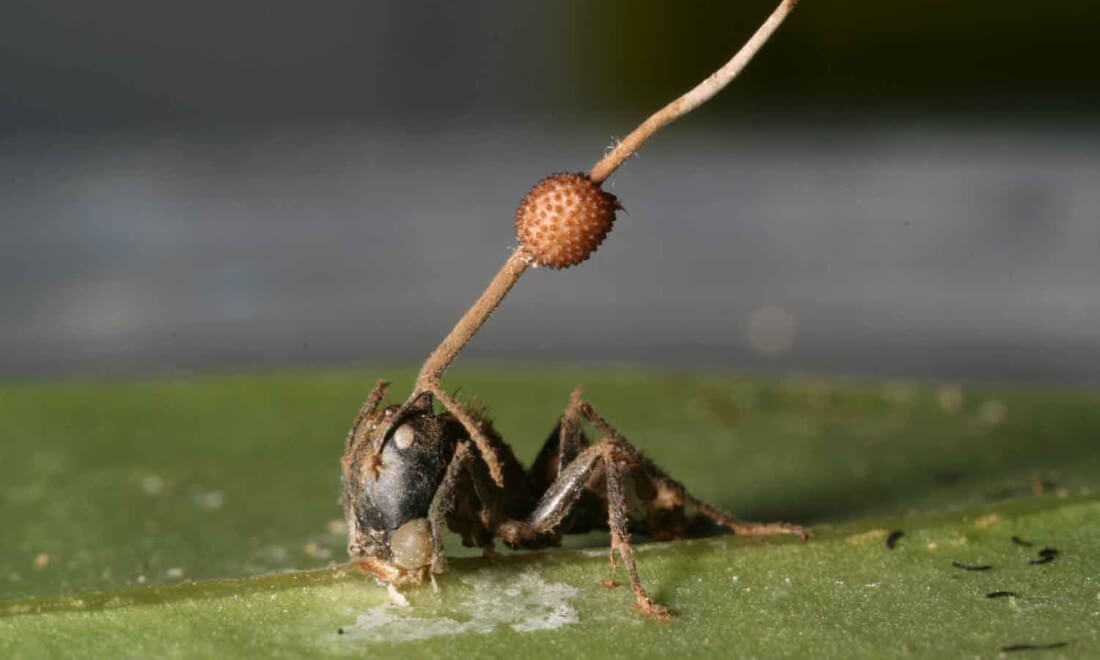 Ophiocordyceps unilateralis (zombie fungus) doesn't control ants by infecting their brains. Instead, it destroys the motor neurons and connects directly to the muscles to manage them.

Ophiocordyceps unilateralis (zombie fungus) infects a carpenter ant; it grows through the insect's body, draining it of nutrients and hijacking its mind. Over a week, it compels the ant to leave the safety of its nest and ascend a nearby plant stem. It stops the ant at 25 centimeters, a zone with precisely the right temperature and humidity for the fungus to grow. It forces the ant to lock its mandibles around a leaf permanently. Eventually, it sends a long stalk through the ant's head, growing into a bulbous capsule full of spores. And because the ant typically climbs a leaf that overhangs its colony's foraging trails, the fungal spores rain down onto its sisters below, zombifying them.

Maridel Fredericksen used a special microscope to julienne infected ants into slices just 50 nanometers thick, a thousandth of the width of a human hair. She scanned each portion, compiled the images into a three-dimensional model, and painstakingly annotated which bits were ant and fungi. It took three months to mark up just one muscle. Hughes teamed up with computer scientist Danny Chen, who trained artificial intelligence to distinguish ants from fungi to speed things up.

When the fungus first enters its host, it exists as single cells that float around the ant's bloodstream, budding off new copies of themselves. But at some point, as Fredericksen's images show, these single cells start working together. They connect by building short tubes, a kind that has only ever been seen in fungi infecting plants. Hooked up in this way, they can communicate and exchange nutrients.

Anyone else discusses the zombie-ant fungus; they always talk about it as a single entity that corrupts and subverts a host. But you could also think of the fungus as a colony, much like the ants it targets. Individual microscopic cells begin life alone but eventually cooperate, fusing into a superorganism. Together, these brainless cells can commandeer the brain of a much larger creature.

But surprisingly, they can do that without ever physically touching the brain itself. The team found that fungal cells infiltrate the ant's entire body, including its head, but they leave its brain untouched. Other parasites manipulate their hosts without destroying their brains, says Kelly Weinersmith from Rice University. "If such parasites were merely invading and destroying neuronal tissue, I don't think the manipulated behaviors that we observe would be as compelling as they are," says Charissa de Bekker from Central Florida. "Something much more intricate must be going on." She notes that the fungus secretes many chemicals that could influence the brain from afar.