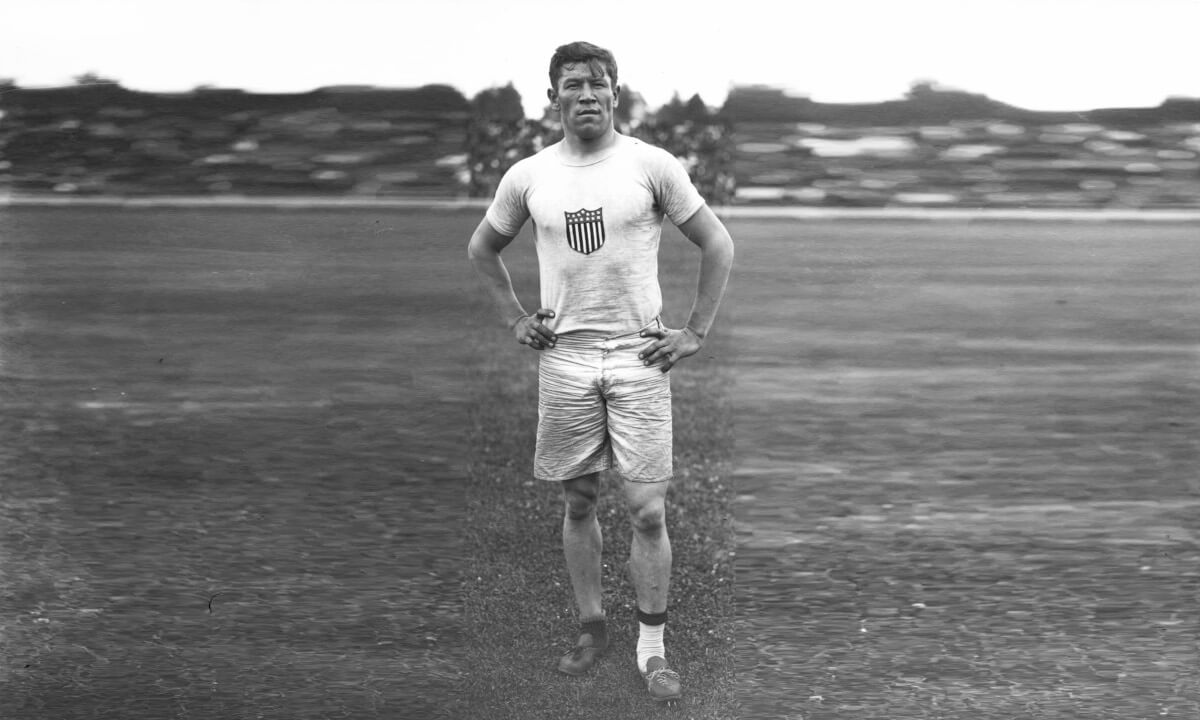 In the 1912 Olympics, Jim Thorpe had his running shoes stolen on the second day of the games. He raced for the gold medal with a mismatched pair of shoes.

Jim Thorpe dashed through the 1912 Summer Olympics in Stockholm, and we’re still chasing him. Greatest-ever is always hard to quantify, but Thorpe is especially so, a laconic, evasive passerby who defies Olympic idealizing. Breakfast of champions for Thorpe was no bowl of cereal. It was a fried squirrel with creamed gravy after running all night in the woods at the heels of his dogs.

He was a reticent Sac and Fox Indian from the Oklahoma frontier, orphaned as a teenager and raised as a ward of government schools, uncomfortable in the public eye. When King Gustaf V of Sweden placed two gold medals around Thorpe’s neck for winning the Olympic pentathlon and decathlon and pronounced him the most outstanding athlete in the world, he famously muttered, “Thanks,” and ducked more illustrious social invitations to celebrate at a succession of hotel bars. “I didn’t wish to be gazed upon as a curiosity,” he said.

Thorpe’s epic performance in the 15 events that made up the pentathlon and decathlon at the 1912 Summer Games remains the most solid reflection we have of him. Yet even that has a somewhat shadowy aspect. The International Olympic Committee stripped his medals and struck his marks from the official record after learning that he had violated amateurism rules by playing minor-league baseball in 1909-10.

Thorpe began the 1912 Olympics by crushing the field in the now-defunct pentathlon, which consisted of five events in a single day. He placed first in four of them, dusting his competition in the 1,500-meter run by almost five seconds.

On the second day, Thorpe’s shoes were missing. Warner hastily put together a mismatched pair in time for the high jump, which Thorpe won. Later that afternoon came one of his favorite events, the 110-meter hurdles. Thorpe blistered the track in 15.6 seconds, again quicker than Bob Mathias would run it in ’48.

On the final day of competition, Thorpe placed third and fourth in the events in which he was most inexperienced, the pole vault and javelin. Then came the very last event, the 1,500-meter run. The metric mile was a leg-burning monster after nine other events over two days. And he was still in mismatched shoes.