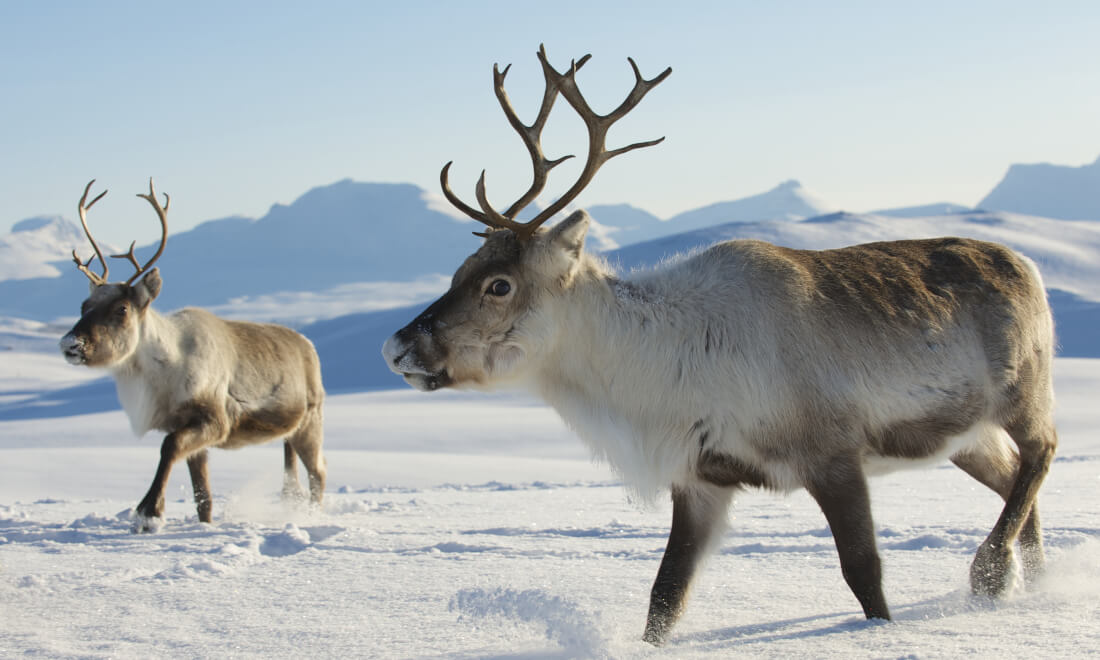 Reindeer can see the world in ultraviolet light, unlike a human. Under UV light, both food and predators stand out much more against the harsh snowy background in the Arctic.

Most mammals, including humans, see using light from the visible part of the spectrum; ultraviolet light, which has a shorter wavelength, is invisible. But not so reindeer, says Glen Jeffery of University College London. The frozen wastes of the Arctic reflect around 90 percent of the UV light that hits them; snow-free land typically reflects only a few percent. So Jeffery and colleagues wondered whether reindeers had adapted to their UV-rich world.

In dark conditions, they shone LED lights of different wavelengths, including UV, into the eyes of 18 anesthetized reindeer while recording with an electrode whether nerves in the eye fired, indicating that the light had been seen. The UV light triggered a response in the eyes of all the reindeer. “Since migrating to the Arctic 10,000 years ago, these animals have adapted incredibly quickly,” says Jeffery.

The team’s experiments with a UV camera in the Arctic suggest why. They showed that urine, a sign of predators or potential mates and lichens, a major food source for reindeers in the winter months absorbs UV light, making them appear black in contrast to the UV-reflecting snow.

“Very few mammals see UV light. Rodents do and some species of bats do but we have no idea why they have developed this capability,” says Jeffery. “This is the first time we have got a real handle on why a mammal uses UV light.” The eyes of most mammals cannot cope with UV light because it carries enough energy to destroy their sensitive photoreceptors, permanently damaging vision. To prevent this from happening we experience “snow blindness”: our corneas respond to UV light by becoming temporarily cloudy, preventing excess amounts of UV from reaching and burning the retina.

“Why don’t reindeer, arctic fox, polar bears, or arctic seals get snow blindness?” asks Jeffery. “Arctic mammals must have a completely different mechanism for protecting their retinas.” To try to shed light on this conundrum, Jeffery and his team plan to return to the Arctic later in the year. “If we could work out what this protective mechanism is perhaps we could learn from it and develop new strategies to prevent or treat the damage UV can cause to humans,” he says.