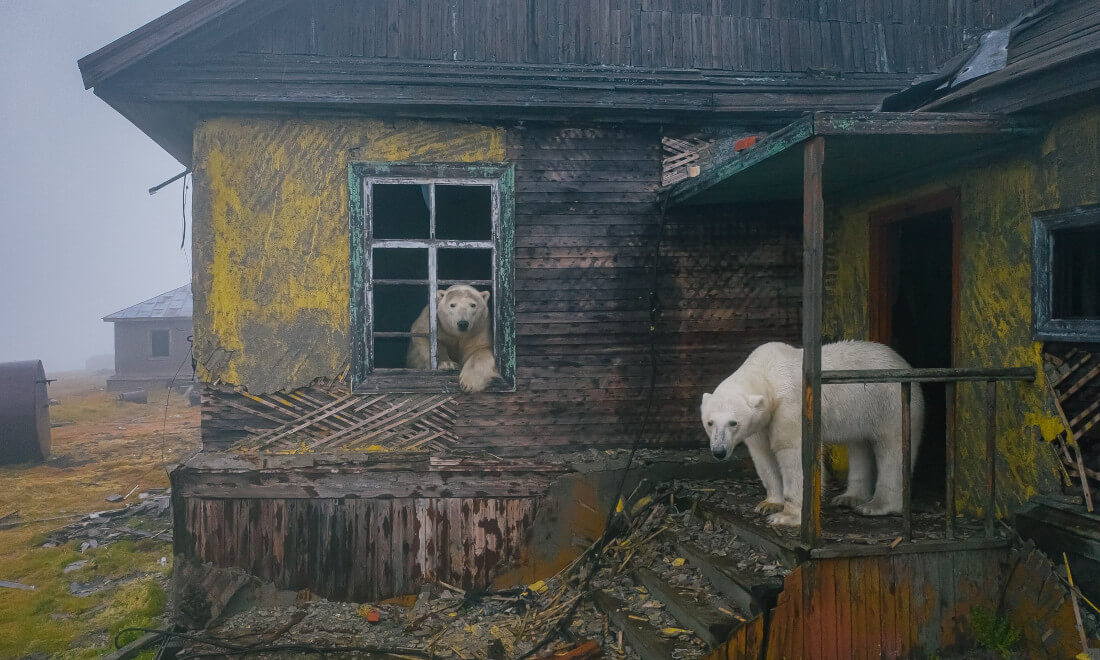 Polar bears have taken residence inside the buildings on an Arctic island left behind by their former inhabitants a few decades ago.

Dozens of polar bears have been making themselves at home in abandoned buildings on an Arctic island, and a Russian photographer captured remarkable photos of the bears peering through windows and standing on porches.

When photographer Dmitry Kokh traveled to the remote Russian region of northern Chukotka in late summer 2021, he was hoping to find polar bears to photograph on Wrangel Island, a natural reserve and World Heritage site that's protected by the United Nations Educational Scientific and Cultural Organization and is located above the Arctic Circle.

What he found instead was a strange and unexpected sight: On the smaller Kolyuchin Island to the south of Wrangel Island, more than 20 polar bears had taken up residence in buildings that were once part of a Soviet weather station.

To capture the photos, Kokh used a camera mounted on an aerial drone that had been modified with low-noise propellers, making it quiet enough to slowly approach the bears without disturbing them. In the photos, the bears appear unconcerned about the camera and photographer — but when it comes to polar bears, looks can be deceiving, Kokh warned.

"Polar bears are very clever — and sometimes tricky — hunters," he said. "Sometimes they pretend they are not looking at you, and they are relaxed; at this moment, they are ready to attack."

A nature reserve employee was with the group at all times, carrying a rifle and flares as precautionary measures to ensure the team's protection. Polar bears weigh up to 1,700 pounds (770 kilograms), but for all that bulk, they are surprisingly quick, capable of galloping up to 24 mph (40 km/h), according to McGill University.

Polar bears usually inhabit remote parts of the Arctic that are far from humans, but climate change is reshaping their habitat and has even driven bears to invade towns in the Russian Arctic in search of food. Since 1979, the sea ice that the bears depend on for hunting has shrunk and grown thinner, and researchers predict that summer sea ice could vanish from the Arctic by the end of the century.

Though polar bears face an uncertain future, these images of the bears peering out from ramshackle buildings are a reminder that life on Earth can persist even as human-made objects and structures break down, Kokh told. "But life will exist forever only if we care about it," he added.