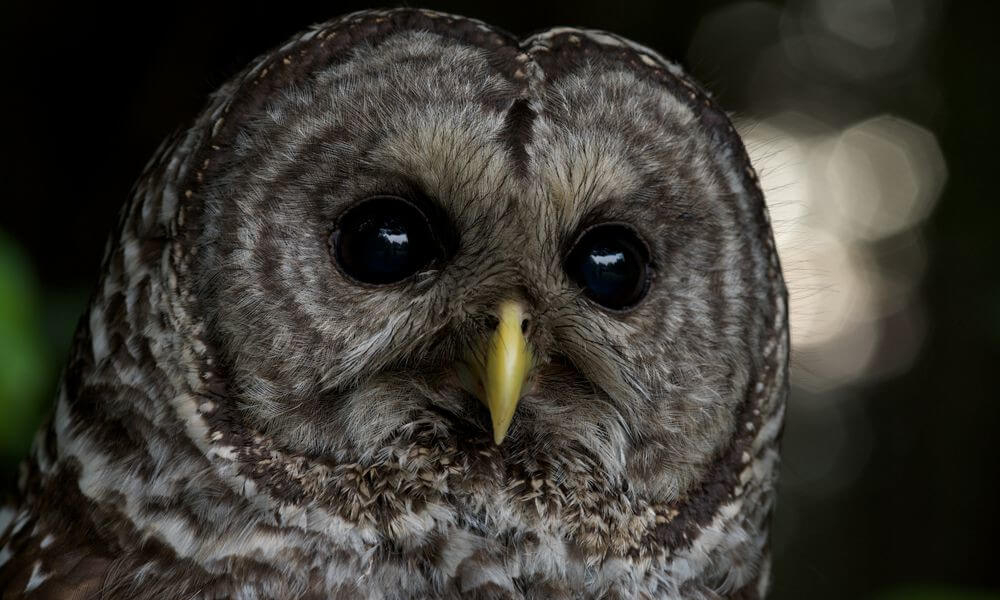 The Eyes of Owls

Owls cannot move their eyes. Their eyes are not eyeballs but cylinders held in place by bones. So owls have evolved to be able to rotate their head 270 degrees horizontal, and 90 degrees vertical.

The Eyes of Owls

Owls can’t move their eyeballs. That’s because owls don’t have eyeballs at all. Instead, their eyes are shaped like tubes, held rigidly in place by bones called sclerotic rings. (Human eye sockets, which hold spherical eyes, do not have sclerotic rings.)

Because owls can’t roll their eyes around the way we do, they have to move their entire head to get a good look around. They frequently twist their head and “bob and weave” to expand their field of view. Owls can turn their necks about 270° in either direction and 90° up-and-down, without moving their shoulders!

Although owls can’t move their eyes, many other adaptations help these raptors spot prey. Owl eyes are huge! An owl’s eyes can account for up to 3% of its entire body weight. (Eyes account for about .0003% of a human’s body weight.) There is one drawback to their large eyes. Owls are very farsighted. They can’t focus on objects that are too close. Instead, sensitive whisker-like bristles around their beaks help owls detect objects at close range.

Owls have terrific binocular vision compared to other birds. Binocular vision describes the ability of animals with two eyes to see an object with both eyes at the same time, giving an animal increased depth perception. Like all birds of prey, an owl’s eyes face the front. This allows them to have a much greater range of binocular vision than animals with eyes situated on the sides of their heads. An owl’s field of view, for instance, is about 110°, and about 64% of that is binocular. A sparrow, on the other hand, has a much larger field of view, up to 300°, but their binocular vision is much more limited, sometimes only 10%.

Most owls are nocturnal, meaning they are most active at night. Two adaptations help owls see well in the dark. First, owl eyes are dominated by densely packed retinal rods. All animal eyes have photoreceptors shaped like cones and rods. Retinal cones function best in bright light and are responsible for color vision. Rods are much more sensitive and function best in dim lights. Rods outnumber cones 30 to 1 in owl species, including the great horned owl and barn owl, enabling them to see better than humans in the nighttime darkness.

Finally, owls have “eyeshine.” Eyeshine is a result of an animal’s tapetum lucidum, a layer of tissue behind the retina that reflects visible light. This reflection dramatically increases the light available to the animal’s photoreceptors and gives it superior night vision.