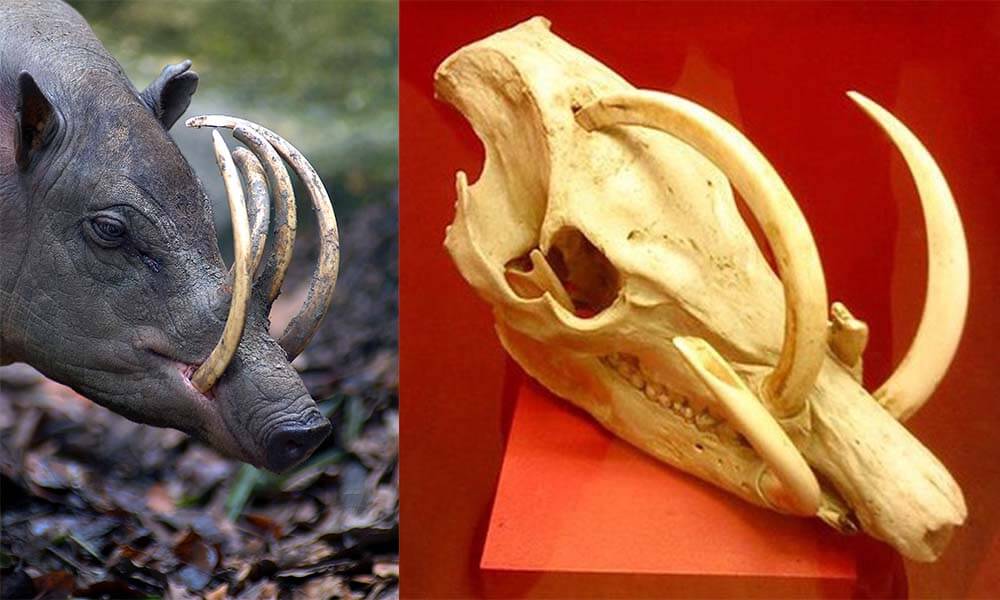 The Babirusa is a species of wild pig, whose males can grow tusks so long that they curve backward and impale his skull, slowly killing him.

Babirusas are also called deer pigs because they look like swine (pigs) and have tusks similar to the antlers of a deer. These animals are omnivores eating a diet of plants, fruits, berries, insects, and carrion. They live on the Sulawesi, Sula, Buru and Togian islands in Indonesia. They can live up to ten years old in the wild.

Babirusas have brown or grayish skin with a sparse amount of hair on their body. Their long, rounded body has been compared to the shape of a torpedo! Plus, they have slender legs similar to those of a deer. These mammals can grow to a height of two to three feet and can be three to three and a half feet long. Furthermore, they can weigh from 132 to 220 pounds. A three-foot-tall babirusa is equal in height to two and a half bowling pins stacked on top of each other. A 220-pound babirusa is equal in weight to two-thirds of an adult panda bear. Out of all the species of a babirusa, the North Sulawesi babirusa is the heaviest at 220 pounds.

The most well-known feature of this mammal is its tusks. It has two tusks on the lower half of its snout and two on the upper half. Though they are called tusks, they are canine teeth. On its upper snout, the babirusa’s canine teeth grow, break through the skin and curve upward and back toward the babirusa’s eyes. These curving teeth (tusks) can grow so long, they can penetrate the skull of this animal eventually causing death.

The tusks on the upper half of a male babirusa’s snout grow up and curve back toward its eyes and the top of its head. Sometimes, an older babirusa will have upper tusks that are so long, they break through the top of this animal’s skull. This ingrown tusk eventually causes death. Keep in mind the babirusa would have to be very old to have tusks long enough to penetrate its skull.