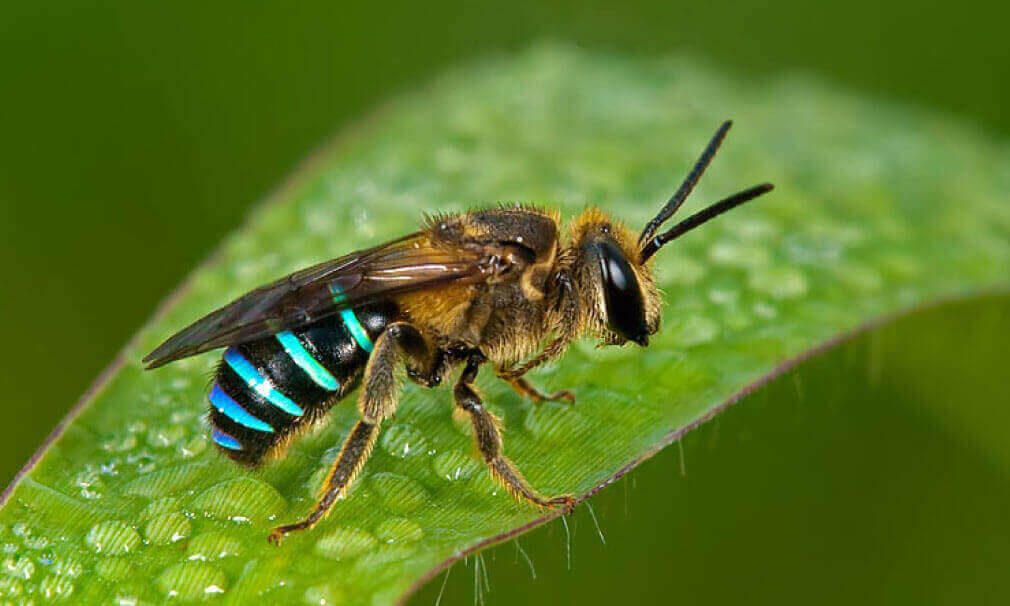 Not all bees are yellow and brown, there is a blue striped Australian bee. And it is one of the most beautiful wild bees in the world.

The Australian blue bee is one of the prettiest bees in the world. Named for the beautiful turquoise bands that run across its abdomen, the blue-banded bee (Amegilla cingulate) sports a lush golden and white fluff, enormous green eyes, and tan-colored wings that look like crisp layers of cellophane.

Males can be distinguished from females by the number of blue bands they display – males have five while females have just four. Adult blue-banded bees typically grow to between 10mm and 12mm.

The species is found all over Australia, except in Tasmania and the Northern Territory. It’s also native to Papua New Guinea, Indonesia, East Timor, Malaysia, and India, so it enjoys a pretty healthy range, spreading out everywhere from urban areas to open fields and dense, tropical forests.

It’s rumored they’re attracted to blue and purple flowers, perhaps because they could blend into their surroundings when collecting pollen from them, but this has yet to be proven.

They are known to frequent lavender plants, however, and according to the Australian Museum, they appear to be attracted to people in blue clothing. But it’s cool because these bees are non-abrasive, and don’t move around in intimidating swarms like other species, they live solitary lives in little burrows in the soil or the crevices of rocks.